The Story of Boost The Budget

With one week to go on this season’s Boost The Budget campaign, the scheme’s original architect and former DFCSG Chair, Wayne Raper, tells YOURCLUB Content about the circumstances in 2016 that lead to the idea, its growth since those early days and how BTB has become an integral part of both the Club’s finances and culture.

As I sit here and write this, with the current Boost The Budget total for the upcoming season at a little over £76,000 and gathering pace towards what is likely to be another spectacular finale, little did I think five years ago that the scheme would have raised over £430,000 in donations to support the Club’s playing budget.

The scheme has now become part of the annual ritual of Darlington FC fans, just like buying a season ticket or the latest replica shirt. The call to action is clear and the fans answer it year-on-year, regardless of the success of the prior season and even when a global pandemic shows up wreaking havoc on the worldwide economy.

Darlo fans just refuse to be beaten, digging deep to help supplement the building of the latest squad which might just be the one to take us to the next level, or get us that money spinning FA Cup tie.

Let me take you back to that day five years ago when the scheme, which has become a critical income stream, was first launched.

We were deep in the midst of “seatgate” and in my role of Chair of DFCSG. I’d been summoned to a meeting with then manager Martin Gray and the DFC Directors. Martin just been told that his team, who were positioned to finish in the play-offs, wouldn’t be able to compete due to an administration oversight. To say he was less than pleased would be an understatement.

I don’t think I need to tell anyone that Martin is a fierce competitor. It was that character that helped us to three promotions in four seasons and got the Club back to playing at the level we would have been had we not been unceremoniously dumped into the Northern League and forced to change our playing name in 2012. 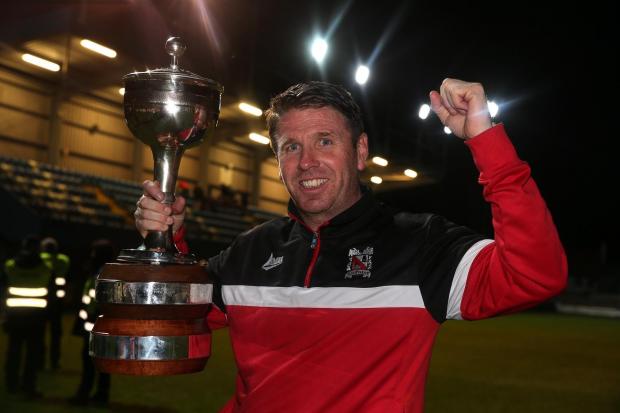 Martin had also come to the table to ask for an increase on the current season’s playing budget; the Directors had come to tell him that the playing budget would have to be considerably scaled due to an overspend in the current season. I think you can all gather what sort of reaction that was met with. Let’s just say it was one of the more uncomfortable meetings I’d have the pleasure of attending!

The meeting was concluded with Martin telling us that he had backers who would be interested in funding the Club and he would be speaking with them. We’d agreed to meet with these backers and see what they had to say. As we all know there’s no such thing as a free lunch, so we waited to see what the conditions of any such deal would be and whether it would be in the long-term interests of Darlington FC.

Faced with the prospect of losing a number of the fan favourites, a total restructuring of the squad and a potential relegation dogfight, I met with the DFCSG board and discussed ways that we could try and fill some of the budget void to enable us to at least be competitive on the pitch. The problem here was that we were talking about raising large sums in a short amount of time, however this was something I’d become quite accustomed to during my short but eventful time as DFCSG Chair (I’ll write a book one day).

I knew fans probably didn’t have the disposable cash to pay in a lump sum, but we could spread this over the course of the season to make it more manageable. Crowd funding wasn’t a particularly new concept – we’d used it to raise funds for the move back to Darlington via the Community Share route, but that was built on fans actually owning something and the potential for shares to be repaid in future years.

Essentially what we were asking for here was for the fans to put their hands in their pockets for no other return than to hopefully watch a better standard of player on the pitch each week. The money would be a pure donation. I’d seen other clubs run schemes to play for a single player’s wage in the past, but what we were looking to do here was to raise a significant chunk of the playing budget. 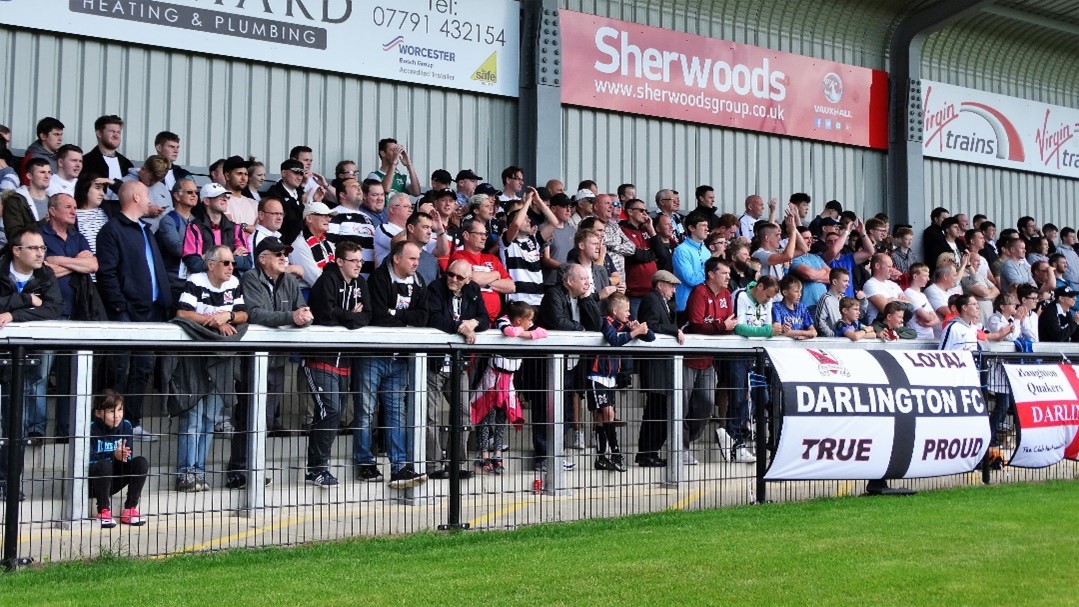 Utilising the excellent fundraising platform we’d built alongside Mike Price, some modifications were made to allow fans to set up a monthly Direct Debit to ease the burden and within a week of the original meeting with Martin we’d launched Darlington FC’s first ever Boost The Budget scheme, with the aim to raise a total of £80,000.

No-one at the Club had any sort of idea what the appetite for such a scheme would be at a time when we were asking fans for money left, right and centre to help facilitate the move back to Darlington, to build the extra seating capacity at Blackwell Meadows and to also plug financial holes from past seasons.

Remember, this was going on against the backdrop of the devastating news of not being able to compete in the National League North play-offs and the manager desperately trying to find external funding to allow him to continue the upward trajectory of the team on the pitch, culminating in what can only be considered a PR disaster at a subsequent fans’ forum.

As we found out a short time later, the backer brought to the table was a man Darlington fans knew all too well and the notion of him asserting any sort of control over the club again was quickly kicked into the long grass by the fans.

It was a turbulent time to say the least. That we managed to raise over £40,000 was a huge testament to the supporters’ willingness to constantly dig deep to support their beloved club, regardless of the circumstances. The funds helped us to retain players and build a squad that could be competitive in the division. It was the start of something that has grown and grown ever since.

As the Club has moved forward off the pitch and the ethos of fan ownership has been understood and embraced by more and more fans, so too has the contribution to the Boost The Budget scheme. In year two, with Tommy Wright at the helm having finished the season strongly and having signed some promising young players, the fans more than doubled the previous seasons’ total, backing the manager to the tune of £85,000.

In year three, despite a poor season on the pitch, the arrival of Alun Armstrong spawned a wave of optimism that saw us smash the £100,000 barrier for the first time and, despite a global pandemic, year four saw an astronomical amount of £130,000 raised in donations. The first and last three days of the scheme accounting for over 90% of the total pledges was a sight to behold as the totaliser just kept going and going. 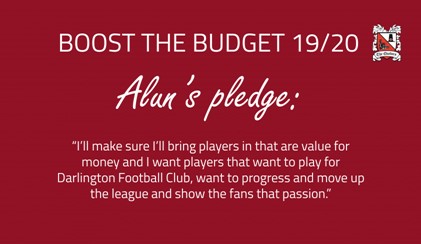 Boost The Budget obviously helps from an overall revenue perspective, but there are a couple of additional benefits that aren’t always seen. By raising the funds in advance of the season it helps massively with the financial planning that Chris Stockdale as CFO has to undertake in setting a sustainable playing budget.

Rather than try and fill a revenue gap in February, which has been the case in the past, we now have a much more strategic approach in understanding how much the fans are willing to back the Club financially before Alun is handed his war chest. In addition, as many of you subscribe to the scheme on a monthly basis, it ensures a regular cashflow into the business. Anyone who has ever run a small business will understand how vital cashflow is, and a smooth one at that.

At this level, a harsh winter can lead to several postponements, meaning no gate receipts. Before BTB, gate receipts were the only regular source of income. In the past this has led to some very challenging times as players still need to be paid. BTB alleviates that pressure as funding comes in every month, regardless of whether we play or not.

In fact, one of the most pleasing aspects of BTB has been the amount of people paying monthly who have stuck to their promise, even when things haven’t been going so well. It would be easy to pull the funding, but that would only serve to exacerbate any problems and by continuing with their pledge, it helps the Club remain in a good position financially.

Each year more and more fans get involved, desperate to be part of the fantastic collective that call themselves fans of Darlington FC. Many increase pledges year on year. Of course, as with anything, there is a ceiling and with the lack of football last season and the uncertainty caused by the global pandemic, Darlington fans could be forgiven for maybe taking their foot off the pedal this year.

However, knowing what has been achieved in the face of adversity in the past, I wouldn’t bet against Darlo fans going big again. Their enthusiasm to support this Club seems know no bounds.

When the going gets tough, the Darlo fans get going.

The 2021/22 Boost The Budget scheme is open until Monday 31st May. You can pledge here. 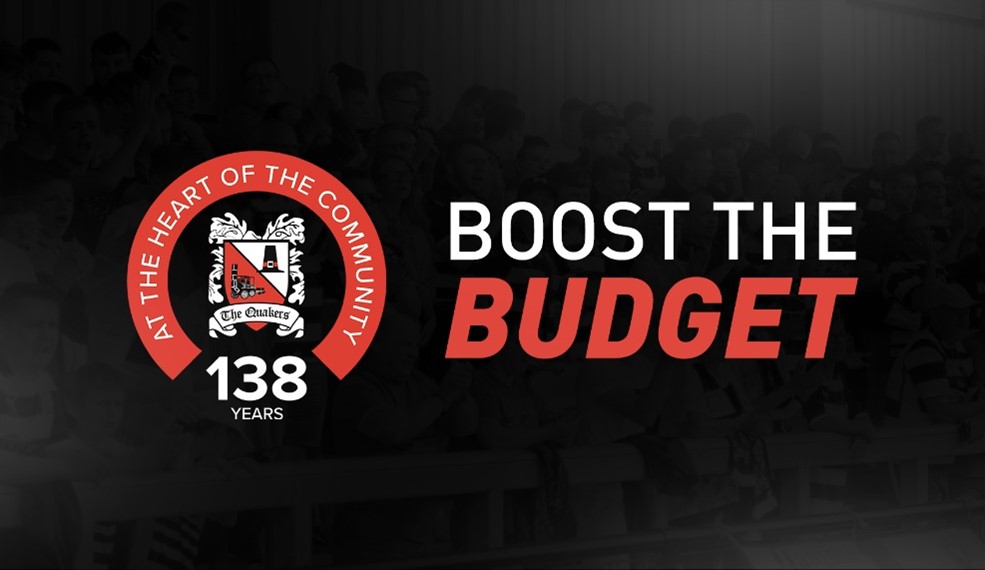