Written in 2020 at the time of YOURCLUB's launch, Craig Stoddart takes a look at our fan-owned journey since 2012 and what it means to be an Owner of Darlington FC.

As you’re here reading this article there’s more than a fair chance Darlington FC are your team. Literally your team.

Fan-owned and fan-driven, propelled by a combination of your money, your time and your devotion over a number of years, Darlington encapsulate the ethos of being a fans’ club.

Taking your spot at 3pm on a Saturday - global pandemic not withstanding – to cheer the lads on, is a representation of everything that has been achieved since the summer of 2012. Without you, there is no club.

Owners are members of the Darlington FC Supporters Group (DFCSG), who are the club’s majority shareholders, and this has enabled supporters to have an influence, and help give the community and the town a team to support and a home at Blackwell Meadows.

The Tin Shed, the seated stand, the players in front of you – none of that happens without dedication from fans united by a common goal, and that gives supporting this club, our club, an extra sense of meaning.

Perhaps it means more once you’ve come close to losing it.

Prior to 2012 the relationship to the club most of us had was as a fan, a paying punter going through the turnstiles at the Arena every other Saturday.

But the Arena era ended amid administration and turmoil, the Football Association decreeing Darlington would play in the Northern League by handing out the body blow of a four-division demotion from the Conference.

This was a pivotal moment, when the fans stepped in and under the guise of the Darlington FC Community Interest Company (since replaced by the DFCSG), and sparked a new beginning.

Darlington are now the club that the fans built. That you built. That you would not let die despite the many and varied challenges that have been faced over the past eight years.

We’ve come a long way in that time, and the launch of YOURCLUB brings an opportunity to reflect on the journey so far.

In eight seasons we have been to Bishop and back, won three promotions, had three managers, played 374 games and seen £1.4m raised through various means by supporters. It is a staggering number, particularly bearing in mind gates number around 1,500.

There is no sugar daddy here, no benevolent figure throwing cash around. We’ve come across a few of those in recent seasons. Instead, the philanthropic owners at Quakers are multiple, thousands of us digging deep.

Never is the fans’ dedication more evident than in the annual and incredible Boost The Budget scheme organised by the DFCSG.

The group’s primary purpose is to provide a relationship between the club and its supporters, enabling fans to feel they have a voice, and its importance is underlined by the Boost The Budget initiative.

It has taken place on four occasions now, with the scheme earlier this year initially setting a target of £100,000. The target was smashed with £131,190 the final figure.

That would be remarkable in any year, but it was particularly notable given the country was in the grip of coronavirus and its impact on employment figures.

“It’s overwhelming. No way on earth could we have expected that,” admitted manager Alun Armstrong, the faith the fans place in him having clearly been a factor in the amount raised. “We were expecting a shortfall this year because of the situation. It just shows that they love the club.”

Chris Stockdale, the chair of the Darlington FC Supporters Group, added: “I’m more amazed than ever at the response from our supporters this year given the ongoing pandemic - it's way beyond our initial expectations. I'd like to thank each and every person who has pledged, large and small. Together these funds will help us build a stronger club, on and off the field, going into next season and beyond.”

BTB was the idea four years ago of Stockdale’s predecessor, Wayne Raper, and it is volunteers such as these two who Darlington rely on to keep the club progressing.

Many volunteers have done their bit to help, and while they all deserve credit it would be naïve to begin attempting to namecheck them all as there’d no doubt be someone overlooked who deserves a mention.

That said, you’ll probably know their faces, particularly if you’re a regular at Blackwell - nobody reaches the turnstiles without being targeted in the car park by 50/50 ticket sellers Linda Armstrong and Margaret Dodds, who target match goers with sniper-like precision

John Bowes and Andrew Matthews are part of the 50/50 team too, all of them contributing towards the great success of the half-time raffle. Go to other clubs and their equivalent half-time prize is usually a fraction of the circa £700 usually on offer at Blackwell.

The enthusiasm with which its greeted typifies the sense of responsibility that supporters of fan-owned clubs have, and, when matches were cancelled due to Covid-19, Darlington supporter Andy Clarke showed initiative by arranging a Virtual 50/50 draw to raise funds for the club.

Us football fans we are emotionally attached, therefore more likely to go the extra mile for the club, as demonstrated early one Saturday morning during January 2018 when around 100 supporters cleared snow and got that day’s game on.

If only the players of that period had been as effective on the pitch as the fans. Sadly, Tommy Wright’s era was poor, and while most of the past eight years have been enjoyable there’s been challenging times too.

Losing the play-off semi-final to Ramsbottom in 2014, being banned from the play-offs for not having seats in 2016-17, a dreadful FA Cup record, the contributions of James Caton and Alex Henshall, such experiences test the resilience of the most ardent supporter.

He oversaw three wins in the FA Cup in 2019-20, securing a televised replay with Walsall, which was a huge highlight as was Joe Wheatley’s late leveller in the first game.

Injuries hit hard early in the campaign and results suffered, otherwise Darlington would have been much closer to play-off reckoning when the season was suddenly curtailed in March.

Aided by funds raised via the Boost the Budget, Armstrong has since added impressively to his squad, so optimism is high among supporters ahead of season 2020-21, though it promises to be challenging for many non-league clubs.

The unusual circumstances means commercial revenue is likely to be down as the economy deals with a downturn, but if required Darlington can count on their fans to do their bit.

The last word goes to Armstrong: “This is your club and without you doing this we wouldn’t be here, which is why this club is so special and unique. I will do my utmost to give you what you deserve. Together we’ll be stronger.” 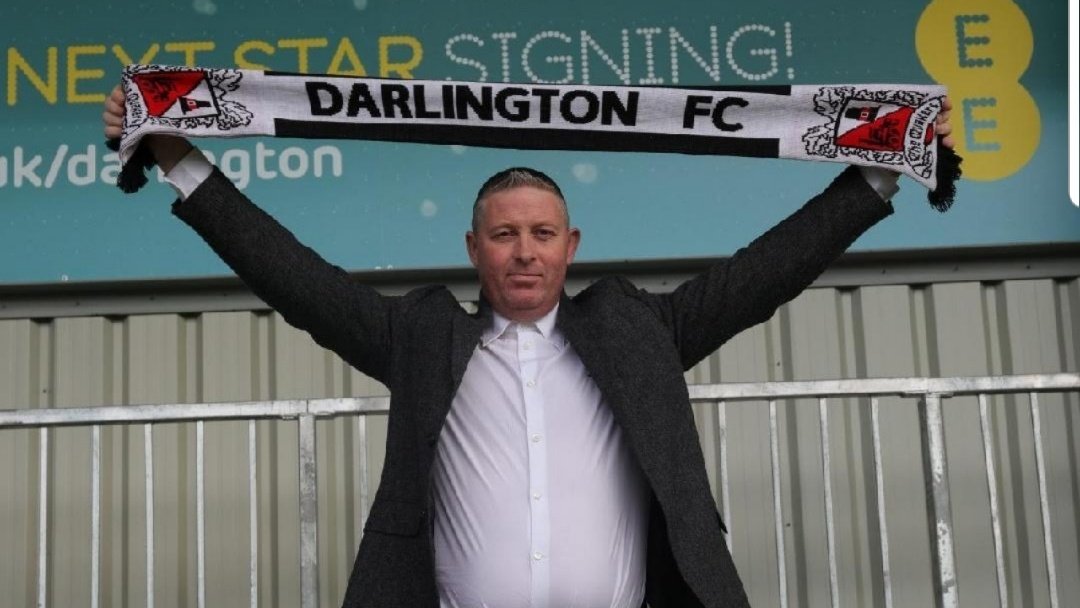