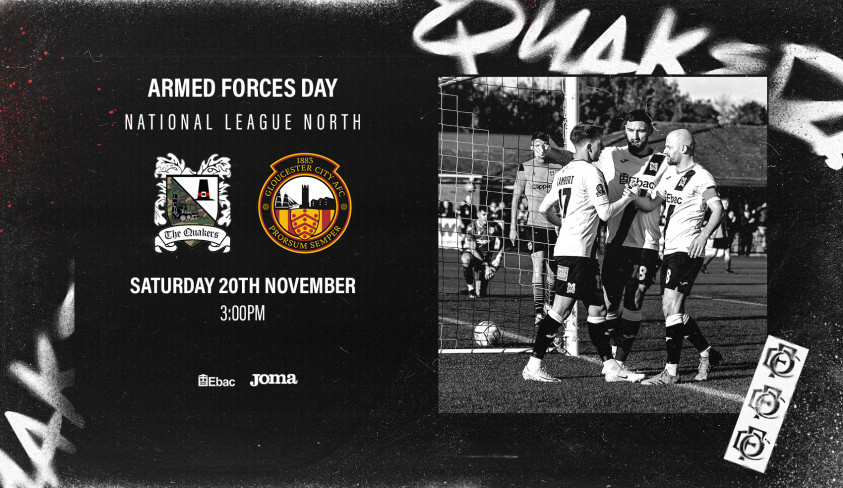 Darlington FC is delighted to announce that it will host its first ‘Armed Forces Day’ when we take on Gloucester City on Saturday 20th November.

This particular game has been chosen due to its close proximity to Remembrance Sunday, 14th November, as the club looks to honour and thank our brave Armed Forces.

The British Armed Forces, also known as Her Majesty's Armed Forces, are the military services responsible for the defence of the United Kingdom, its overseas territories and the Crown dependencies. They also promote the UK's wider interests, support international peacekeeping efforts and provide humanitarian aid.

In attendance on the day will be representatives from:

8 Rifles will be displaying their kit for attendees to view, whilst Sporting Force and Darlington Veterans Community will be located by the bar to chat to the crowd and to promote their organisations, as well as their respective mental health and wellbeing activities.

DFCSG Director Andrew Scullion will have representatives from each group taking part in the popular half-time ‘Spot to Spot’ competition, with the chance of winning £1,000 for their cause!

The club will also be supporting a bucket collection for Sporting Force and we will be holding a minute’s silence prior to kick off to give everyone the opportunity to remember those who have given their lives whilst serving their country.

Tickets for the game are on general sale now at

and are free for serving members of the Armed Forces, as well as veterans, Cadets, Reservists and uniformed organisations such as Cubs, Scouts, Brownies, Beavers, Squirrels and Sea Scouts.

Those applying for free tickets will be required to wear uniform on the day of the game or provide the following identification in advance:

Additional guest tickets can be purchased at the following discounted rate:

Free tickets can be obtained in advance by contacting Joanne Cameron, Match Day Events Manager, at joanne.cameron@darlingtonfc.org. Proof of eligibility will need to be provided.

We’re looking forward to welcoming our Armed Forces’ friends to Blackwell Meadows on Saturday 20th November and giving everyone a great day!